BLOG › Miscarriage - symptoms, types and most common causes of miscarriage

Miscarriage - symptoms, types and most common causes of miscarriage

A miscarriage is the premature termination of a pregnancy that lasted less than 22 weeks. From the 23rd week of pregnancy, it is called a preterm birth. About 10-15% of pregnancies end with a spontaneous miscarriage, with about half ending before the embryo implants in the uterus, that is, before 8 weeks. It is estimated that about 25% of miscarriages may not be known to women because they occur before the 6th week of pregnancy (from the first day of the last menstrual period) and are simply thought of as late menstrual bleeding. 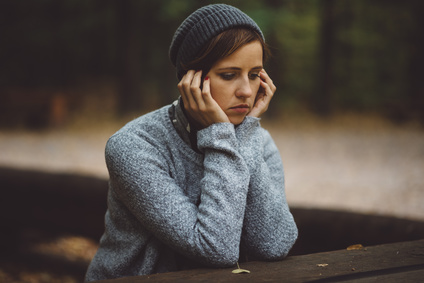 The stages of miscarriage

Depending on the stage of pregnancy at which miscarriage occurs, there are two types of miscarriage:

In medical terminology, there are a number of names to further define the type of miscarriage. Here are the clinical forms of miscarriage:

The second group of miscarriage causes are defects and abnormalities on the part of the woman's body. These include undetected and untreated diseases of the reproductive system (e.g. uterine cancer, myomas, adhesions, erosions, polyps), endometriosis, polycystic ovary syndrome, malformations of the uterus, hormonal disorders (including - thyroid disorders), infectious diseases (e.g. cytomegalovirus, rubella, toxoplasmosis and syphilis) and immunological and autoimmune disorders, read more: about the causes of pregnancy loss. A miscarriage may also occur as a result of mechanical trauma and psychological shock, as well as in complications after diagnostic procedures (invasive prenatal tests, i.e. aminocentesis or biopsy, however these are very rare causes of miscarriage, the risk is 1%).

The risk of miscarriage is also influenced by factors dependent on age (the risk of miscarriage increases significantly after the age of 38) and the woman's lifestyle, including: poor nutrition, overweight and underweight, use of various stimulants (e.g. caffeine abuse, smoking, alcohol consumption) and stress.

Until recently, a common cause of miscarriage was serological conflict, also called maternal-fetal conflict. A serological conflict occurs when a woman's blood is Rh- and the baby's father is Rh+. The fetus, taking on antigens from the father that the mother does not have, can be treated as foreign by the woman's body and be attacked by antibodies. Serological conflicts occur in the second and every subsequent pregnancy. In the first pregnancy, the woman's body will not have time to produce antibodies that would endanger the fetus - but it will be "ready" for the next one. Nowadays, thanks to advanced knowledge, the consequences of serological conflict can be effectively prevented by implementing appropriate treatment consisting in administering appropriate antibodies to the pregnant woman. However, early detection of a potential conflict is very important - determination of the blood group and Rh factor is recommended already at the stage of trying to get pregnant.

The risk of miscarriage is assessed on the basis of blood tests, and the most sensitive risk indicators are estrogen and B-hCG levels. Also the finding of persistent fetal bradycardia (fetal heart rate less than 60 times per minute) is an important signal very often preceding miscarriage. Other indicators of the risk of pregnancy loss are abnormal growth of the gestational follicle, its irregular shape and early microabortion.

The symptoms of early miscarriage are mainly bleeding or spotting from the reproductive tract. It is considered that any spotting in pregnancy should be absolutely consulted with a doctor, who usually immediately conducts an ultrasound to assess the condition of the fetus and determine the possible risk of pregnancy. The situation is more dangerous when, in addition to spotting, cramps appear, which are the second sign of miscarriage - depending on the abundance of bleeding and the strength of cramps we are dealing with a threatened miscarriage or a miscarriage in progress. If the waters break (the third symptom of miscarriage), this usually means an irreversible miscarriage.

Early spontaneous miscarriages are usually uncomplicated, have no obvious symptoms, and the miscarriage symptoms usually appear unexpectedly. The miscarriage may be accompanied by fever and pain associated with uterine contractions. Complicated miscarriages, with high fever (39-40oC) and inflammation of the reproductive organs (especially the uterine mucosa), are much less common, and after miscarriage the woman has to deal with inflammation of the adnexa and peritoneum. Incidentally, both a miscarriage symptom and a complication of miscarriage, can be a general infection of the woman's body with a complex of symptoms: high fever, chills and disorders of consciousness, reduced blood pressure and blood clotting disorders, abdominal and muscle pain, neck stiffness and purulent discharge from the genital tract.

Recommendations for diagnosing a miscarriage depend primarily on which pregnancy was lost (advanced testing after miscarriages is reimbursed after the third miscarriage, i.e., for habitual miscarriages).
According to the National Health Service guidelines, after the first miscarriage, it is recommended to determine the potential causes based on the medical history and physical examination results, in which attention is paid primarily to: harmful environmental factors (e.g. folic acid deficiency), genetic conditions (presence of hereditary diseases in the family), uterine structure abnormalities and exclusion of immune-mediated diseases, and in the next pregnancy early ultrasound examination is recommended.
After a second miscarriage, environmental influences are again assessed and the woman's physical conditions are evaluated, but a thorough evaluation of thyroid function and testing for Chlamydia and Ureaplasma infections is also necessary. After the third pregnancy loss, evaluation of the parents' karyotype and detailed bacteriological testing, uterine hysteroscopy (a speculum examination that allows assessment of the organ walls), and endometrial biopsy are performed.  Blood count and ultrasound of the woman's reproductive organs should be performed every time.


In more than 60% of miscarriages, the cause is genetic defects in the embryo. Therefore, it is best to start the diagnosis of miscarriage with genetic testing, which very often immediately shows the reason for the miscarriage, and thus shortens the diagnostics and the associated psychological burden as much as possible. Securing the tissues of the aborted embryo or fetus allows for a detailed analysis of the situation and conscious planning of the next pregnancy (the couple can find out what are the chances of having healthy offspring and the doctor has the opportunity to implement a course of action that will optimize these chances). In addition to genetic testing, histopathological examination of the material from the miscarriage may also be carried out.  If for various reasons it was not possible to secure the material from the miscarriage - both parents can undergo karyotype testing (a sample of blood is taken from the woman and the man, from which material for testing is isolated). Karyotype testing identifies possible aberrations in the couple's chromosomes (both or one of them) that, while not causing symptoms of disease, may be present in the reproductive cells and make it difficult or impossible to maintain a pregnancy. In the process of diagnosing miscarriage, it is also necessary to exclude mutations that interfere with blood clotting or prevent the absorption of folic acid (necessary for normal fetal development).

It is worth emphasizing here that the decision to diagnose the causes of miscarriage should ultimately be made by the woman or couple concerned. Doctors often do not order any or almost no tests after the first miscarriage, assuming that "it just happens". For some women, however, this attitude is unacceptable, and for them the priority is to find out the answer to the question "why did I miscarry?" Knowing the cause of a miscarriage is essential to minimizing the risk of losing another pregnancy.

A woman's body recovers relatively quickly after a miscarriage, as menstruation returns after about 4-6 weeks, followed by normal ovulation. However, for the sake of the woman's psychological condition, doctors recommend that she refrain from trying to get pregnant again for at least 3-4 months. It takes time to distance oneself from the trauma of a miscarriage. Calm and tranquility are extremely important while trying to have a baby and throughout the pregnancy. Pregnancy after miscarriage does not have to be at risk of loss - it is important to know that miscarriage in the first trimester only slightly increases the risk of losing another pregnancy (compared to women who have not miscarried - the probability of miscarriage is about 5%). Two consecutive miscarriages reduce the chance of carrying another pregnancy to 70%. Three consecutive miscarriages are habitual miscarriages and the chance of carrying a pregnancy to term is about 50%.

The period after a miscarriage is the time we simply have to give our bodies to physically "recover". The higher the miscarried pregnancy, the more time is needed for our body to return to its pre-pregnancy state - this is primarily about hormonal management, but also the state of the uterus. The way of experiencing grief after the loss of a pregnancy is an individual matter, to which it is impossible to apply any measure.

How long after a miscarriage can I start trying for a baby? Is getting pregnant after a miscarriage rmore difficult? There is no clear answer to this question, and doctors - depending on specialty, their own professional experience and the age of the lost pregnancy - speak of a period ranging from three months to a year or even three years. If the miscarriage took place in the first trimester, you can usually try to get pregnant again after three normal cycles. If the miscarriage occurred in the second trimester - it is recommended to wait at least six months before trying for another pregnancy.

The most important thing in preventing miscarriages is to follow your doctor's advice and to prepare properly for pregnancy.

Planning a pregnancy should always start with checking the condition of your body. The following tests should be carried out: blood count, blood group and Rh factor determination, biochemical blood tests, urinalysis, thyroid hormone levels and liver function tests. It is necessary to do all recommended screening tests: for syphilis, the presence of HIV, HCV and HBV and the presence of antibodies against rubella, toxoplasmosis and cytomegalovirus. If you need to treat any disease or inflammation, but also tooth decay, do it before you get pregnant! You should also have a cytology test and a transvaginal ultrasound and have your breasts checked. If you have a chronic illness, your doctor should know about your planned pregnancy, as you may need to change your medication or dosage.

Prevention after a miscarriage will be based primarily on diagnosing the cause or causes and then, if possible, minimizing the risk during the next pregnancy.

Not all factors that affect the risk of miscarriage are within your control. If the cause of the problems with maintaining the pregnancy is genetic - as a preventive measure - we should perform thorough genetic tests, which will allow the doctor to determine our chances of having healthy offspring, read: genes and fertility. If the miscarriage was caused by anatomical, hormonal, immunological factors or some infections - we need to deal with them before trying for another pregnancy.

Apart from medical prophylaxis, it is worth taking care of a healthy lifestyle, which is very important in the context of female fertility. Sometimes small changes are enough to significantly increase chances of getting pregnant. This was proven by a study conducted by researchers from the University of Massachusetts. They have researched women who have lost one or two pregnancies in the past. The results of the study are very optimistic: walking (at least 10 minutes) can increase the chance of pregnancy by up to 82% in overweight or obese women who have a history of pregnancy loss!

Rate this article:
(13)
Previous Article Next Article Previous Next

We use cookies and similar methods to recognize visitors and remember their preferences. By tapping "accept", you consent to the use of these methods by us and third parties. You can always change the settings of your browser at any time by visiting our Cookie Policy. Find out more.